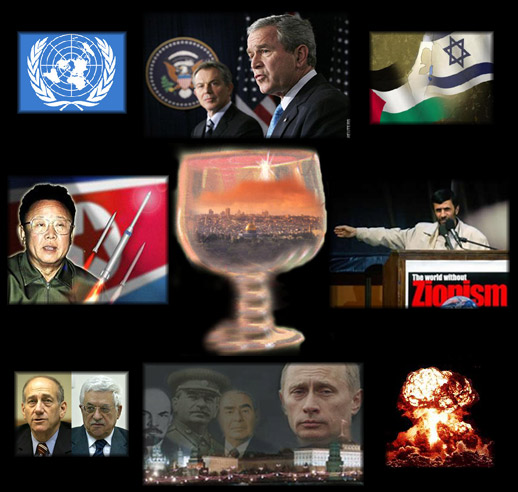 An ominous wind is blowing… many nations are distressed.
The evil leaders in this world, cause turmoil and unrest.
Soon there will be challenges… that all of us must face.
The threat of worldwide war looms, alarming at it’s pace.

Annihilation is promoted. Extinction threatened to the Jew.
How will this be countered? The answer’s known to just a few.
Israel will stand it’s ground; Intimidated by no force.
We will have to wait and see… this war will run it’s course.

Israel has made concessions, and has given up much land.
Still their neighbors ask for “more” …this tactic is long planned.
The neighbors want it “ALL” to keep, and Israel with no share.
There can’t be peaceful compromise, as long as they are there.

They have sworn to kill the Jew, and remove them from the earth.
The evil plans they implement… encourage Israel’s dearth.
All these actions are predicted. The Bible clearly states…
GOD HIMSELF will fight for Israel… and deal with all their hates.

GOD will call them to a valley… HIS OWN fury in HIS face.
The tragic toll of vanquished souls… HE will HIMSELF simply erase.
They’ll be gathered in that valley… Armageddon it will be.
GOD HIMSELF will settle things, to keep HIS people free.

GOD will be victorious; the offending hordes removed.
For seeking to eliminate… the people HE’S approved.
How could “any” enemy, ever hope to overcome…
The power of A HOLY GOD… regardless of their sum.

And I saw heaven opened, and behold a white horse; and he that sat upon him was called Faithful and True, and in righteousness he doth judge and make war.

His eyes were as a flame of fire, and on his head were many crowns; and he had a name written, that no man knew, but he himself.

And he was clothed with a vesture dipped in blood: and his name is called The Word of God.

And the armies which were in heaven followed him upon white horses, clothed in fine linen, white and clean.

And out of his mouth goeth a sharp sword, that with it he should smite the nations: and he shall rule them with a rod of iron: and he treadeth the winepress of the fierceness and wrath of Almighty God.

And he hath on his vesture and on his thigh a name written, KING OF KINGS, AND LORD OF LORDS.

And I saw an angel standing in the sun; and he cried with a loud voice, saying to all the fowls that fly in the midst of heaven, Come and gather yourselves together unto the supper of the great God;

And I saw the beast, and the kings of the earth, and their armies, gathered together to make war against him that sat on the horse, and against his army.

And the beast was taken, and with him the false prophet that wrought miracles before him, with which he deceived them that had received the mark of the beast, and them that worshipped his image. These both were cast alive into a lake of fire burning with brimstone.

And the remnant were slain with the sword of him that sat upon the horse, which sword proceeded out of his mouth: and all the fowls were filled with their flesh.